As September draws closer I have made the first move towards aquiring paraphernalia.
In other words, STUFF about the Chronicles. Yesterday I created two different postcards, for books One and Two... complete with QR codes that will link to my webpage.
Technology is an amazing thing.
So...
Soon stuff will arrive and slowly the hype towards the release day will grow.
Of course, the cover designs make up the postcards, the back will have the blurb, QR code and hopefully space for a signature! :) 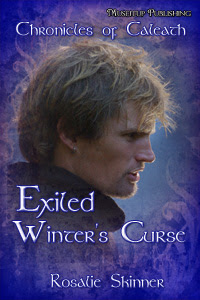 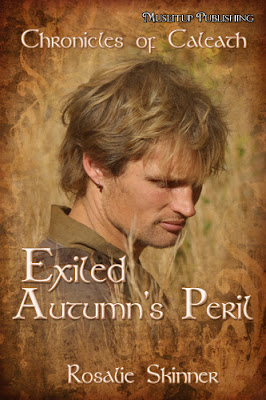 Now to wait for STUFF to arrive...
Posted by Rosalie Skinner at 10:41 AM No comments: 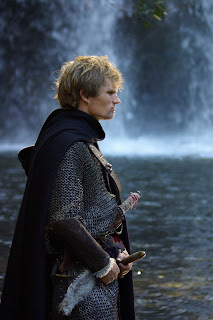 I wondered if an interview with Caleath, the hero of the forthcoming Fantasy ‘Exiled: Autumn’s Peril by Rosalie Skinner might be interesting.
The novel is set on the planet of where Caleath has been surviving in exile. This is a planet where nano-technology is considered magic, while magic is considered commonplace and doesn’t involve microchips or gene enhancement.
Unfortunately, Caleath is unavailable at this time. He is nothing if not reclusive. Perhaps later he will reconsider and talk to us. In the meantime, we have managed to make contact with Nasith, the female lead character from the novel.
Interviewer: Nasith, thank you for taking time to talk with us.
Nasith: Hello. Are you a disembodied spirit or another of Caleath’s alien artifacts? He’s no longer with us. South. He rode south. Alone.
Interviewer: Easiest answer would be ‘an artifact’. Nasith, you sound disappointed that Caleath left, yet he took you as a hostage. Would you tell us a little about your experience?
Nasith: I have time on my hands. For once, we are warm and reasonably safe. What would you like to know?
Interviewer: First impressions are always interesting. What did you make of being abducted on your way to Sharyac’s Tor?
Nasith: (sighs) Seems like a lifetime ago. So much has changed since then.
Interviewer: The same peril still threatens the south.
Nasith: I guess I mean the way I feel about Caleath. That night I tried to kill him. He’s not easy to kill but I wonder now if my heart was in it. One of the men I traveled with was trying to kill him. I was not.
Interviewer: You tried to kill him? That’s not surprising given the circumstances.
Nasith: Before he grabbed me and threw me across the shoulder of his horse I had no dealings with Caleath, but I knew of his plight. If asked at the time I would have said I felt pity for the man. The men who hunted him were driven by dark magic. I had no reason to want to see him hurt, until he used me as a human shield. He bruised my ego, rumpled my pride, nothing else. Now I realize I overreacted, but then it was a dark and desperate night. I felt justified in my actions. Later I came to regret them.
I am rambling. Being clean and able to relax, it’s such a pleasure. What was the question?
Interviewer: We are interested in your first impressions of Caleath. Wanting to hurt him seems natural, since he abducted you.
Nasith: The assassin hunting Caleath gave him little scope for niceties. He took a hostage, me, rather than having to kill the man. I didn’t know that at the time. Then I was afraid. He seemed so angry, frighteningly confident despite being hurt, and somehow vulnerable at the same time. He’s still confusing, but he doesn’t frighten me anymore.
Interviewer: When did your impression begin to change?
Nasith: It was only later, when I managed to get him to talk that I discovered more about him. He actually took good care of me. Despite the hurt I caused. When we faced danger he would protect me, leaving himself vulnerable rather than risk my safety. I was his hostage for only a short time. When he discovered who I was, I believe he saw my presence as a burden but he accepted responsibility even though he says he doesn’t belong on this world.
Interviewer: You knew from the start that he was from another world?
Nasith: The assassin spoke freely about his origins. Only Caleath seemed to find his past a painful topic. Revenge drove him, and the need to escape from this planet. The things he has done, to survive, to escape. I find myself wondering if I know him at all. He confuses me, even now. I miss him and long for his touch one moment and want him out of my life the next. How odd is that!
Interviewer: What does the future hold? 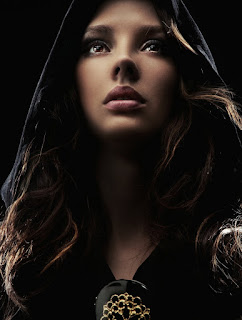 Nasith: Our immediate future is blighted by the looming threat from the south. Here in Sharyac’s Tor we hope to arrange an alliance to combat this unnatural menace. Or do you mean a future that involves Caleath?
Interviewer: I was thinking more along the lines of a relationship between you and Caleath.
Nasith: Some moments I dream of nothing else. As I said, in his arms I feel safe. Looking into his eyes, they are as changeable as the ocean, I am afraid of drowning. I have spent too many hours watching him wondering what makes him do the things he does. The way he moves, it’s almost poetry. A lethal sort of poetry, it’s like watching a predatory cat and it is as compelling. And yet, he has the ability to make me feel extraordinarily special and more sensual than I believed possible. He is considerate, strong, has a depth of compassion I have never seen before. His touch is electric. (sighs) Then I find myself despising him and the lengths he has gone to, the long-term threat of invasion he has created, and I tell myself I am glad he is a dead man walking.
Interviewer: Dead man walking? That’s an odd term for someone who is hard to kill?
Nasith: He took me hostage. My people will see that there is retribution. It does not matter that he took care of me, or that I chose to accompany him in the end. My abduction is unforgivable. He will pay with his life. I cannot let myself become involved. Do you think me heartless?
Interviewer: It is not for me to judge.
Nasith: There, now you sound like him. I think we have spoken long enough. Good night.
(transmission ends)

(transmission ends)
Posted by Rosalie Skinner at 8:38 PM No comments:

Each day in June Museitup Publishing blog is hosting free workshops on writing.

Come and check out these great offerings from Muse authors and editors.

Getting Into Character: Can you fill your Hero's Shoes
UNLEASH YOUR CREATIVITY!
Write About What You Know conclusion
WRITE ABOUT WHAT YOU KNOW PART B.
WRITE ABOUT WHAT YOU KNOW PART A.
Editors and You
Working With Your Editor
Disagreeing With Editors
Choosing an editor
Editors and You
Research, The Joy and The Pain
The Return to Childhood Memories through Adult Cre...
Developing Characters- How Do I Make My Characters...
MAXIMIZING YOUR ONLINE PRESENCE

There are also discounts available during June and special one day discounts offered for 24 hours.

See you there!!!
Posted by Rosalie Skinner at 9:10 AM No comments:

This month's article focuses on Fantasy names.
Drop in to Fantasy Faction.com

How do you choose your fantasy names? Do you have a favourite method?
Posted by Rosalie Skinner at 6:42 PM No comments: