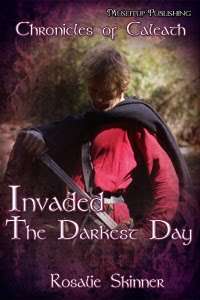 This is a fast paced novel trapping the reader in a full-on experience of the power and intensity that dark magic has, especially on the immortal Caleath as he battles with forces of evil.
In his mission to rescue the Kentorian princess, Corrine, and to save the planet Allorn from invaders, Caleath is thrust back into the deadly game. Caleath becomes`Tag' in order to hide his identity. When exposed, he suffers great physical pain from his enemies, but his impossible struggle to contain the vengeful warrior, Wrath, within himself, ignites a bloodlust he abhors and threatens to destroy his last feeble grip on innocence and compassion.
Ms Skinner's beautiful writing and vivid imagination delivers an amazing other world filled with such memorable characters as Merkatt, the dragon Queen; Tallowbrand, the ghost archmarge; and the dreaded dark lord, Cassius, who wears a cloak that absorbs light and power. We also welcome back Caleath's loyal friends, among them Penwryt the wizard; Gwilt; Raul; Etham; Jenna, the young witch bethrothed to Spider with the mismatched eyes; and Joel a young wizard. Ms Skinner skilfully uses violent Nature as the atmospheric backdrop to the violence in this story, so that Nature is almost a character in itself.
Strap yourself in for another exhilarating, fabulous adventure in a fantasy world like no other, teeming with vibrant life. You'll keep coming back for more of this series The Chronicles of Caleath.
Posted by Rosalie Skinner at 8:48 AM No comments:

Incisive Interview... Behind the facade...

A Conversation with Rosalie Skinner hosted by John Rosenman.

Thanks for John for his great questions and for allowing me to be his guest.
A great way to celebrate the release of ADRIFT.


Don't forget to enter the contest too.

Posted by Rosalie Skinner at 1:54 PM No comments: