The SEVENTH BULL enters the arena...

Today in the arena we face
THE SEVENTH BULL...
by
GORDON ROTHWELL

To get a FREE copy of
THE SEVENTH BULL to review,
answer the question at the end of the blog. This offer is valid for one week only.


Gordon, your story has recently released through MuseItUp Publishing.  Can you tell us a little about what inspired you to write The Seventh Bull.

I suppose it began when I saw Tyrone Power back in the 1940’s in Blood and Sand.  I was fascinated by the drama, color, costumes, pageantry and danger.  Over the years I read a lot about bullfighting, especially the works of Ernest Hemingway.  Eventually I saw several bullfights in person. The one that sticks in my mind was when I went with a party of friends from Los Angeles down to Tijuana.  We wanted to see the world’s Number One matador, Antonio Ordoñez, in an exhibition at Plaza Monumental by the sea.  We experienced a lot that weekend----a wild cab ride to the arena, the unruly Americans at the bullfight, the grand parade of bullfighters in all their finery, the ritual of the bullfight in three acts, and the exciting parties after the event.  We all went to a famous motel, The Sierra, afterwards.  It was an unforgettable sight.  Beautiful women in toreador clothing and flat-brimmed gaucho hats clapping and dancing to the flamenco music of a small mariachi band.  Laughing, chatting movies stars like Mike Conners who was starring in MANNIX on TV, Diane Baker and Cesar Romero. And Gilbert Roland with his white shirt sleeves rolled up, and a leather sleeve on one forearm, surrounded by young fans and regaling them with fanciful bullfight tales. That was the experience I drew upon when I wrote The Seventh Bull.

Bullfighting is not usually a sport I would follow but reading about your character has aroused my interest.  What is it about bullfighting that fascinates you?

I cannot think of another sport that is so thrilling.  I was amazed to see one man stand up to a charging thousand-pound bull with only a small stick and a piece of red cloth to protect him.

Bullfighting has a long history of colorful fighters, great victories in the arena, and tragic deaths of beloved and legendary figures.  It has spawned hundreds, and perhaps, thousands of books and articles on the subject.  It has an army of ardent fans, and an equal number of those who hate the sport and who have attempted to get it abolished.

But it still thrives, survives, and keeps thrilling audiences all over Europe, South America and Mexico.

When writing The Seventh Bull did your characters follow your plot path or did they take off on a life of their own?  Are you a plotter or a pantzer?

I am a plotter mostly.  Much of my writing over the past twenty years has been screenplays.  And for that, I always like to work out a step outline of each and every scene in the film.
When I write fiction, I do much the same, and work out each scene from beginning to end, with a firm idea of what the ending will be.
Once in a while, my characters might say something that I didn’t expect.  That often surprises me and delights me when they talk back, or rebel against what I have plotted.  But for the most part my story and my characters stay true to the plot I have laid out for them.

Writing the story is only half the exercise, though, isn’t it?  What research did you do to give The Seventh Bull its authenticity?

Because of my interest in bullfighting at an early age, I began collecting books and articles on the subject.  I amassed box loads of material.  I drew on a lot of that when I wrote two screenplays, Matadora and Even The Sea Must Die, with bullfighting as a background.
There was some producer and studio interest, but the scripts never sold.  They wound up with the tear sheets and paperbacks in a cardboard box.  But my extensive research for script development, and my attendance at bullfights in person, gave me a pretty solid background to draw from.

Becoming published is not always easy.  What do you think is the most important thing a writer needs to face along the road to publication? I am an old man.  And I have been writing for more years than I care to say.  I’ve been lucky enough to make my living as a writer.

I have had a lot of people try to discourage me along the way---teachers, relatives, my wife, bosses, friends, agents, editors, and producers.  But I forged on.

I think the best advice I can give anyone is to stay the course and listen to our heart, not any outside influences.  And disregard that inner critic who tells you to give up.  Always fight for it.  It will happen sooner or later.

Have you always been a writer?

No.  But I’ve always been a reader.
It wasn’t until college that I began to think of writing as a career.  I was encouraged by a professor in the Journalism School at the University of Washington.  He had been a successful writer of Young Adult books and his wife was a magazine writer who had published a great many stories in The Saturday Evening Post.

Their words spurred me on and I became the Sports Editor of the college paper and a featured writer for the campus humor magazine.  After college, most of my writing was done in Los Angeles for aerospace firms, and in San Francisco advertising agencies. 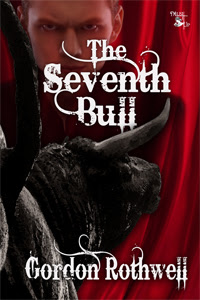 BLURB
Once at the top of his journalistic game, Robert Dunne is now a drunken hanger-on following the circuit of a highly acclaimed matador.

Paco Garcia is known and revered as "The Bullfighter Who Can't Be Killed."
Dunne hopes to jumpstart his languishing career with a bestselling book revealing the mystery of Paco's phenomenal ability to escape "death in the afternoon."

But circumstances take a macabre turn when the famous matador fires his beautiful manager---despite her dark warnings.
Will Dunne heed the woman's threat of dire consequences---or is he prepared to give the Devil his due?

While the other two toreros stumbled and blundered fighting their four bulls, Paco was magnificent with his pair of selected beasts.

Paco showed the crowd why he was called"The Bullfighter Who Can't Be Killed." He stood under the hot sun, with never a backward step, and sent his bulls crashing to magnificent deaths in a sea of gore and spittle.

The crowd that had come to see Paco gutted ended up screaming, "“Olé, olé, olé!”, until they had no voice left to use. Paco gave them the works: pase de pecho, natural, manoletina, veronica, a kneeling molinete, and even the famous arrucina.
The fans forgot the inadequacies of the other matadors, as they sat enthralled by Paco's mastery of muleta and sword. Paco cheated the crowd out of seeing him get a fatalcornada.

He was brilliant. And, finally, the last espada had been driven into the blood-soaked aorta of the sixth bull of the afternoon. 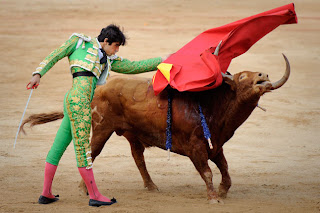 A hitched team of plow horses then carted the last gory carcass off into the shadows beyond the stands. When I rejoined Paco, he was making like a playful schoolboy. "Ha, Roberto," he shouted at me, "we showed them, didn't we? No adornos. No funny clown hats. Or the telephone bit. We just showed them all the classic moves."

"And courage, Maestro," I added.

"I was the best today, Roberto. Not only the master of my muleta and sword, but of my very soul as well."

To get a FREE copy of THE SEVENTH BULL to review, answer this simple question,
What sport is featured in The Seventh Bull?
and send your answer to
CaleathsQuest @Gmail.com (no spaces) and I will forward your answer on to the author.
OR
Grab your copy of The Seventh Bull today for only $1.59... Save 20% BARGAIN.

Thanks for dropping in today!

Posted by Rosalie Skinner at 9:06 AM

I love your blog Rosalie, your presentations as well as your novels are awesome.

Your guests are always interesting.

Gordon Rothwell's The Seventh Bull is a very entertaining read. I charged through it like a bull at a red flag and wasn't prepared for the shocks. Well done Mr Rothwell.

On April 8th, Gordon Rothwell will be a guest at http://wendylaharnar.blogspot.com.au/ Come and hear what else he has to say.

Gordon, what a fascinating journey to publication of this story. The premise sounds intriguing to say the least, and a story about a bull fighter is definitely fresh and unique!

Thanks Wendy, Sara,
it has been great having a variety of writers as guests. The Seventh Bull sounds amazing.
Thanks for dropping in.
Wendy I will be sure to visit your blog when Gordon is a guest there to learn more about The Seventh Bull.