How to Create a series of Fantasy Covers...

The Chronicles of Caleath have a series of awesome covers to tempt readers. The team behind the creation of these covers deserve recognition. It's a long story...began when I first self published and was given a cover that brought tears to my eyes. Anyhow.. here's how the final eight covers came about... 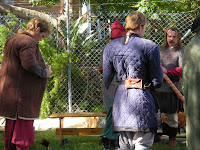 FIRST FIND YOUR HERO...Finding someone suitable for becoming your hero means hanging about looking conspicuous at medieaval faires and the like. Helps to have a friend who is involved so when you spot a likely looking hero type across the way, she can introduce you. Thanks to Rachel from our local writing group, we were introduced to Matt. He was performing with his re enactment group ROGNVALD'S LITH. 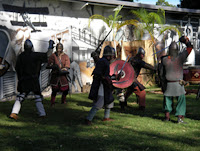 Being the wonderful character he is, Matt agreed to pose for some shots then and there. When the background had cars and powerpoles in them he suggested using his property for location shots and offered to wear the right type of costume for the books. 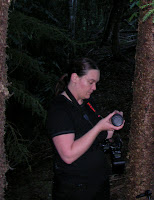 SECOND: FIND YOUR PHOTOGRAPHER.
Once we decided that we needed to travel to Matt's property and stay a night or two, my organising director booked accomodation and also arranged for her photographer friend to accompany us. Rachel Lewis, known for her photographs under her working name FIATHRIEL on Deviantart, brought her camera and skills.

Before we arrived at Matt's property of rolling hills,
forests, creeks and paddocks, he had read the first
four books in the series. Familiar with the character and the story line, Matt suggested various locations within an hour's drive from his place.
The first photoshoot was at the top of the waterfall pictured. Then Lisa, Rachel and Matt scrambled down a steep cliff laden with cloak and lugging chain mail and camera gear. Sadly I could not negotiate the climb and had to wait patiently for the crew to return.
My first glimpse of the idyllic location and photos produced came later.

ORGANISER, ARTISTIC DIRECTOR and ENTHUSIASTIC SUPPORT came in the form of Lisa Egan, soon to become my dear daughter in law.

Lisa's imagination and eye helped create the right look to each scene. Matt's incredible range of armour and equipment added the right
touch to the photos.
It is one thing to be in a wonderful location, it is another altogether to be able to place the model and incorporate the mood and feel that will be reflected for a cover picture.

Lisa, Matt and Rachel produced some magical shots and I still enjoy going through the collection.

The night shoot on Saturday evening, produced the Battle cover.
The cloak apparently is annying to wear. Makes scrambling up a vertical cliff, wearing 40kg of chain mail a challenge.
Still... looks great. What author would forego the chance to have a cloaked hero? A short servicable cloak.. hmm. Where is the magic in that? Thanks Matt. Sorry about the climb!

This great 'wheat field' series was shot in Matt's own  100 acre back yard. Each year Matt's property is used to host a mediaeval re enactment battle. Known as the Generals last stand... a dedicated group of local combatants camp out and do battle over a long weekend. There are forts built and battles fought. Incredible setting.  Incredible hobby.

Someone had to carry the spare gear. I volunteered. The rest of the
crew were all working too hard and I wanted to do my bit. :)

Did I mention the chain mail weighs about 100kg?  Hmm.. ok, it starts out weighing about 20kg at the bottom of the hill, but by the time you have lumbered through the forest and up to the grass plain, it weighs much more! Mind you as the sun set and the cold crept across the paddocks the gambeson was welcome and so was the cloak. :)

There was a shoot in the forest, and another in the field of 'wheat' on Matt's property,  where the Autumn cover, was shot.

We travelled on Sunday to a couple of locations that
Matt had in mind. Here we took the shots for the cover of Invaded.
Some of my favourite photos come from the last location where
Matt found a small shard of crystal, that fitted perfectly with the
story line. To this day I keep the piece of coloured quartz on
my writing desk.

Having good quality photos, professionally presented and of high resolution, meant I could offer them to the publisher for my covers. I had already obtained copywrite and written permission from Matt, and I am still in constant touch  with him and Rachel. We are all thrilled that our efforts have enabled Delilah to purchase the photos and use them in the covers.
The cost might have been high in a dollar sense, but I consider every dollar well spent. How much fun did I have as the author, seeing my character come to life? Priceless.
Every author dreams of seeing their books become movies. Well.. this was pretty close. :)


So, creating a series of covers for Fantasy novels can be a Fantastic experience in itself. :)
Posted by Rosalie Skinner at 9:04 PM

Email ThisBlogThis!Share to TwitterShare to FacebookShare to Pinterest
Labels: fiathriel, ROGNVALD'S LITH, the chronicles of Caleath

Great character for a series of great covers.

Finding Matt and having his support has been a huge bonus. He fits the character to a T. Can't thank him enough.
Or Rachel,
Or Lisa,
Or Delilah...

What fun you must have had and such beautiful settings . . . and model. :)