'An Ode to November' Guest post from Edith Parzefall

It is with great pleasure I welcome Edith Parzefall to my blog today. Edith is the multi published, best selling, author of Strays of Rio, a thriller taking the world by storm. It is great to have her here today to help celebrate the release of her latest novel, "Knights in Dark Leather" written in collaboration with Francene Stanley. The second book in the Higher Ground series based in the far distant future of Cornwall England. So, enough from me... Take it away Edith...

I love cold and blustery November. Today, it is one year since MuseItUp Publishing offered me a contract for Strays of Rio  (link at Muse.)

Twenty days later, on November 29, Double Dragon Publishing had accepted Wind Over Troubled Waters (DDP Link)  the first book in the Higher Ground series, I co-wrote with Francene Stanley. Only yesterday, the second book, Knights in Dark Leather (DDP link) was released as ebook. The paperback should follow within a few weeks, likely this November. :-)

I always found autumn and winter the most productive times of the year. Spring lures me outside, and the sweltering heat of summer makes me want to hang around beer gardens and chill.

Come to think of it, my novels are either set in spring or summer, or in an exotic place of warmth and sunshine like Rio de Janeiro and Chile. If I ever write a novel in a wintery setting, I'll probably start in early summer.

Of course, the nice weather doesn't mean my writing isn't dark and sinister.

In the Higher Ground series, even the weather turns vicious. I'm sure I fetched a warm blanket while working with Francene on these scenes: 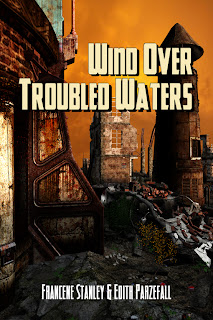 "The house is moving," Cerridwen yelled. "Come outside." She supported Mother's frail body while they staggered to the door. Screaming and wailing in protest, mud and water carried debris down the hill. No time to dwell on fear. Cerridwen forced them outside into the eerie backdrop.

Clouds obscured the moon. Rain drove into their faces. She headed for the familiar large overhanging rocks in the distance. At one with the earth, the outcrop would offer safety. But could she and Mother reach it in time? Mud ran over Cerridwen's feet. "The hill's sliding toward us." Pushing against the driving rain, they struggled on. She dragged Mother with each step. A flash of lightning lit the rocky part of the hill.

"Look. Over there." Nearly to their goal, maybe three men's length away.

The slipping mud knocked Mother off her feet. Cerridwen clutched her fur, but Mother slid away from her grip. In panic, Cerridwen bent, grasped her arm, and pulled her from the sucking mud. After a few staggering strides, a gust of wind almost pushed her over. A thick branch hurtled toward them and struck Mother. "No!" Cerridwen screamed. Slipping and sliding, she used strength she'd never needed to call on before. With a mighty effort, she pulled Mother up and hauled her over the last few steps to the shelter of large boulders.

Her gaze flicked to the ocean. Cerridwen gasped. Out of the sea a monster wave rose, blocking out the sky. Taller than two men. She clutched Trevly tighter.
The water crashed into her. Hard. Cold. The world a blur. Tumbling twisting water everywhere.

The drag ripped Trevly's hand away. Salt water filled her nose, her mouth, sucked her down, down. Lifted up and churned in the wave's power, Cerridwen pictured her mangled body dragged by the monster to the bottom of the world. A clear thought struck through her fear. She'd never see the ring her mother told her about.

Hitting the hard ground, she slid over the debris and smashed into a dune. With a hiss and gurgle, the wave abandoned her heavy body. She sucked in a breath. Trevly! The sea washed over her again, dragged her back.
No! She reached out but found no hold on the sand closest to the dunes. At last, she grabbed a rock on her slide towards the sea. She sat up, took a big gulp of air, and looked around, wiping wet hair tangled with seaweed from her face.

Thanks for joining us today Edith, an exciting time for you and Francene. I love your writing. Strays is already hitting the best seller lists, and well deserved place for a great thriller. The Higher Ground series are also wonderful stories, told with exceptional skill. Congratulations and celebrations!!
******

If you want to read more from Edith and Francene... and get a glimpse into the far distant future of Corn World...
When the first book was released Edith, Francene and I all collaborated with three chapters and shared characters... it was great fun. If you would like to read those adventures follow the link for the first chapter. When Worlds Collide here on Ramblings from Lady Rosalie
Then head over to EDITH PARZEFALL's blog PART TWO
Complete the adventure at Stitching Words - - Francene Stanley PART THREE
Posted by Rosalie Skinner at 4:30 PM

Thanks so much, Rosalie! It was fun to bring some storm and gloomy weather to your spring blog. :-)

Wonderful post from my world-acclaimed writing partner. And Rosalie, you've done a fantastic job with the layout.

Hi Edith, Francene... Congratulations... May your books never go out of print!!